Pool is a fascinating game, in large part because it’s NOT a game: it’s a platform.

What I mean by this is that there are quite a few completely different types of pool games out there, enjoyed by all different kinds of people. Whether you’re playing 8 ball, 9 ball, straight pool, or some whacky variation, you’re still playing pool…but you’re not at all playing the same game.

However, if you’ve come looking for how to play pool, you’re likely looking for the rules to the most commonly played pool game out there: 8 ball pool. This game is so ubiquitous that it is often just called “pool” by most players, but it’s worth making the distinction because of how other variants (particularly 9 ball) are starting to catch on.

The funny thing is, even if you mean to find the rules to 8 ball, that could mean one of two vastly different games, as the tournament rules differ vastly from the more casual play; this leads to a differentiation between “8 ball” and “bar pool” depending on who you’re talking to. These pool table rules are going to be completely different depending on the setting you play in.

So, let’s go over both real quick.

The basic setup here is simple. You have 15 numbered balls, of various colors, and a cue ball. Half of the balls (1-8) are solid colors, while the other half (9-15) are striped balls. These are commonly referred to just as “colors” and “stripes” for shorthand.

To start, you set all of the balls up in a triangular rack. These balls should be in a random order, with three constants: one of the back corners must be a sold, the other must be a stripe, and the center ball in the rack must be the 8 ball.

Once setup, the rack is removed and you are ready for the break.

Place the cue ball anywhere you wish behind the “head string” (the second dot or diamond on the long sides of the table is the forwardmost point that you may place the ball). This area is also referred to as “the kitchen” in billiards terminology.

Strike the cue ball with your cue. It must then contact a legal ball (any ball but the 8 ball) and break apart the initial cluster at least enough for one ball to impact a cushion on the side of the table.

If a ball is pocketed on the break, you may continue play. The first ball pocketed OUTSIDE the break determines your “team”, however, not the break itself. Meaning if you pocket a solid on the break, but a stripe on your follow-up turn, you are locked into only targeting stripes for the rest of the game, making your initial point moot; your opponent essentially gained a point by your actions.

The first person to sink all of their balls, and then the 8 ball, wins. A player who sinks the 8 ball BEFORE all other valid targets are sunk loses instantly. All shots need to be called to be valid. Eg, “9 ball left side pocket” means you are intending to sink the 9 ball in the left side pocket, and that is your only valid play. If you sink it into the corner pocket, or for example sink the 10 ball into the left pocket instead, you foul.

The main thing that differentiates tournament 8 ball from bar pool is the extensive foul rules. These include: 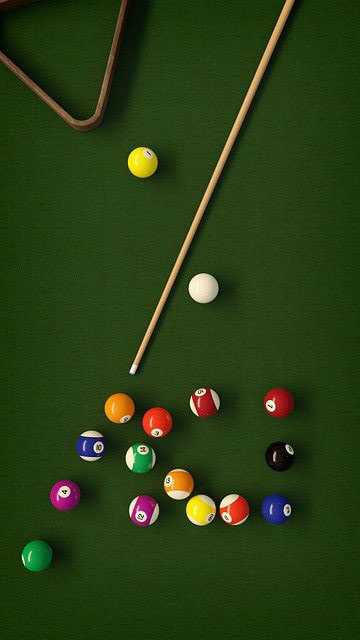 One other major rules difference involves the concept of a “safety” shot. You can call safety at any time. This essentially means that no matter the outcome of your shot, play ALWAYS returns to the other player afterward, rather than staying your turn after you pocket a ball.

This is a great way to make a no-stakes play for yourself that leaves the cue ball in an awkward (or potentially impossible) position for your opponent. This is usually used while you’re ahead to start putting the squeeze on your opponent.

Finally, there are a few extra ways to lose in tournament play: not correctly calling the 8 ball shot at the end of the game can result in an automatic loss, and scratching while trying to sink the 8 ball results in an automatic loss. In playing such tournament games it’s better to have the right tool in the game. It’s advisable if you invest in most dependable pool cues in the market.

Having a pool table in a bar is iconic because they just complement each other. Although there are similarities between pool and snooker, there are more similarities with Bar pool and tournament play because of the shared basic rules. 15 balls, sink your assigned group and then the 8 ball first to win. Racking rules are the same, as are the rules for the break.

Aside from moving the pool table from an arcade or bar location, The difference is that the rules are much simpler, especially in regard to fouls. That is, there ARE no fouls, save for scratching the ball.

Additionally, a scratch is a bit more punishing in bar pool, as it allows your opponent to take ball in hand and place wherever they like in the kitchen before shooting.

Pocketing balls on the break sets your group, unlike tournament play. You become assigned to whichever group has the least balls left.

You may win on the break by pocketing the 8 ball.

And, finally, there are no “safety” shots. Or, technically, there are…but calling one is a great way to get whacked upside the head by the other player for “cheating” or more specially playing “dirty pool”. And yes, this IS the origin for that term (a synonym for “unsportsmanlike”) you may have heard before.