Pool tables or billiards have a long and rich history. They were discovered in the 15th century and was played by kings in those times. It was practiced in Europe and at first was played as an outdoor game and soon became an indoor game with wooden tables and green cloth to simulate the grass.

The name billiards was derived from the French  language. They used a stick called mace made of wood. The game was called as Noble Game of Billiards. The game of billiards was even neatly portrayed in Shakespeare’s Antony and Cleopatra. Then the cue-stick was developed that replaced the Macy’s. The cue was only used by men while ladies continued to use the wooden mace.The tables were formed with all the edges covered that prevent the ball from falling. The edges were called as banks and soon players started to hit shots called bank shots which will make the ball fall from the rails of the pool table. 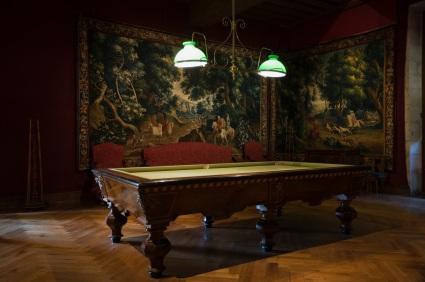 The shot is not actually aimed at making the ball fall while the intention is to hit the rail and return to the table and hit the balls into the pocket. After the Industrial revolution, pool game became famous in England and across the world. Players started to increase various functions of the cue and started to put leather tip cues for hitting the ball perfectly and providing some extra technical shots. The wooden tables were replaced by slate material because wood started warping soon and was not durable. When the game was discovered, there were no size restrictions on the board and later in the 18th century the size of the board was fixed to 2:1 ratio of length to width. In England, the game was called English Billiards and was one of the most famous and popular game at that time.

This paved the way to discover Snooker in the later years which has the same concept as English Billiards but uses different balls and colors. In America, the most popular was the four-ball billiards game. This was a slight extension of the English Billiards. It contains four balls- two white and two red and four-pocket table. The successor of four-ball billiards was the fifteen-ball billiards and it became so popular in the world. The game is so interesting that each ball will be named from 1 to 15 and when a ball is pushed into the pocket, the value of the ball is taken as the points. The player with more than half of the total value is declared the winner. A few years later, instead of counting the value on the balls, people started to count the number of balls pocketed by the player and the one with most balls was called the winner.

Pool and billiard tournaments were held regularly and was appreciated all over the world. After World War II, people started to focus on their lives and careers as they felt sitting in a pool room and playing billiards was a waste of time. Women were also allowed to play the billiards game but they found it difficult to master and they did not possess the right skills for the game.